The Entomology lab is involved in several projects within the Woods and Wildlife programs. 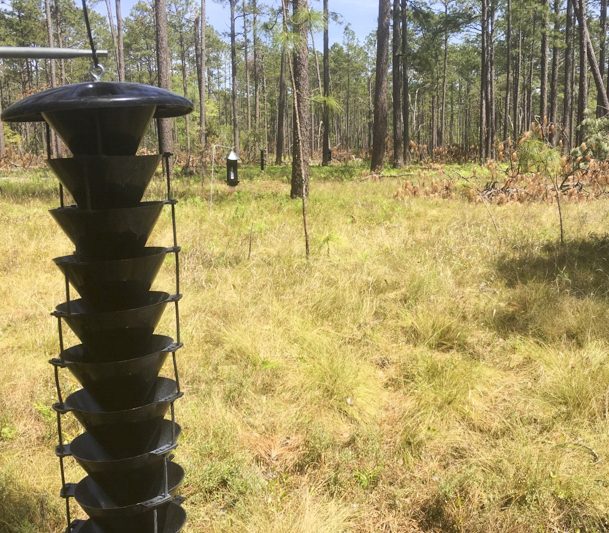 The damage caused by Hurricane Michael in 2018 was substantial and impactful across the Ichauway landscape. Our lab is studying the aftermath of the hurricane in terms of its impacts on the prevalence and abundance of several species of tree damaging insects.

In one study, we are examining how the damage done by Hurricane Michael, and the current management practices to restore a healthy longleaf pine ecosystem, affect root and lower stem feeding beetles and their associated fungi. To do this, we set up fifteen plots across Ichauway in three different treatment types: (i) wind-disturbed only (no logging, no burning); (ii) wind-disturbed/prescribed burned; and (iii) wind-disturbed/prescribed burned/salvage logged/stands. We will monitor these plots for a three-year period and collect root and lower stem feeding beetles using pitfall and Lindgren funnel traps, across all treatments. At peak target beetle activity live beetles will be trapped with the use of billet traps and plated for associated blue-stain fungi. We will take root samples from symptomatic and visually healthy longleaf pines to assess the blue stain fungal species (Leptographium spp., Grossmania spp., and others) within the roots of longleaf pines. This research project aims to improve longleaf pine restoration after wind disturbance events such as hurricanes.

In a companion study, we are looking at the aboveground impacts of Hurricane Michael which passed over the Ichauway property causing an average of 25% tree blowdown. These damaged trees may serve as a resource for local bark beetle populations, potentially causing them to increase. This project aims to measure the effect of removing the downed trees via prescribed fire and salvage logging on the beetle’s populations. To do this, 15 independent transects were set up across three treatment combinations: prescribed fire and salvage logging prescribed fire only, or no treatment. The transects consisted of 6 Lindgren funnel traps containing Ips and woodboring beetle pheromone baits. The traps contents were collected weekly from April to September and will be compared across treatments. Through this research, we hope to add to the knowledge of land management practices post-wind disturbance.

Crucial to Ichauway are the dung and carrion beetles, which serve as primary nutrient cyclers in the insect world, establishing niche segregation based on selective preference for dung and/or carrion type, condition, and size. Nutrient cycling plays an important role in food web dynamics, allowing for otherwise unutilized nutrients to re-enter the food web. The exclusion of mesopredators (mid-trophic, medium-sized predators) is likely to impact population densities and compositions across trophic levels, including the decomposer guild of insects. This study hypothesizes that the exclusion of mammalian mesopredators will have a negative impact on population abundance and diversity of dung and carrion beetles. Four established predator exclusion plots approximately 100 acres in size that have excluded predators by way of 4-foot-tall electrical fencing for 15+ years and four similarly paired control plots were chosen as our sampling sites. We placed a transect of pitfall traps within the center of each plot, spacing pitfalls approximately 50m apart with a bobcat, coyote, and deer dung used as baits and left for 72 hours. The pitfalls were collected after a 72-hour sampling period and the position of each bait type was randomized every month to prevent location bias. A carrion pitfall trap was established on the edge of the pitfall transect and was baited with half of a deceased rabbit and sampled seasonally after an eight-day period. We will identify all dung and carrion beetles to a genus or species level and compare population density and diversity between the predator exclusion and control plots, dung types, and site characteristics. Results from this study will examine the effects of habitat fragmentation within the decomposer guild of insects and explore the implications of urbanization across the landscape and the necessity for future habitat conservation. 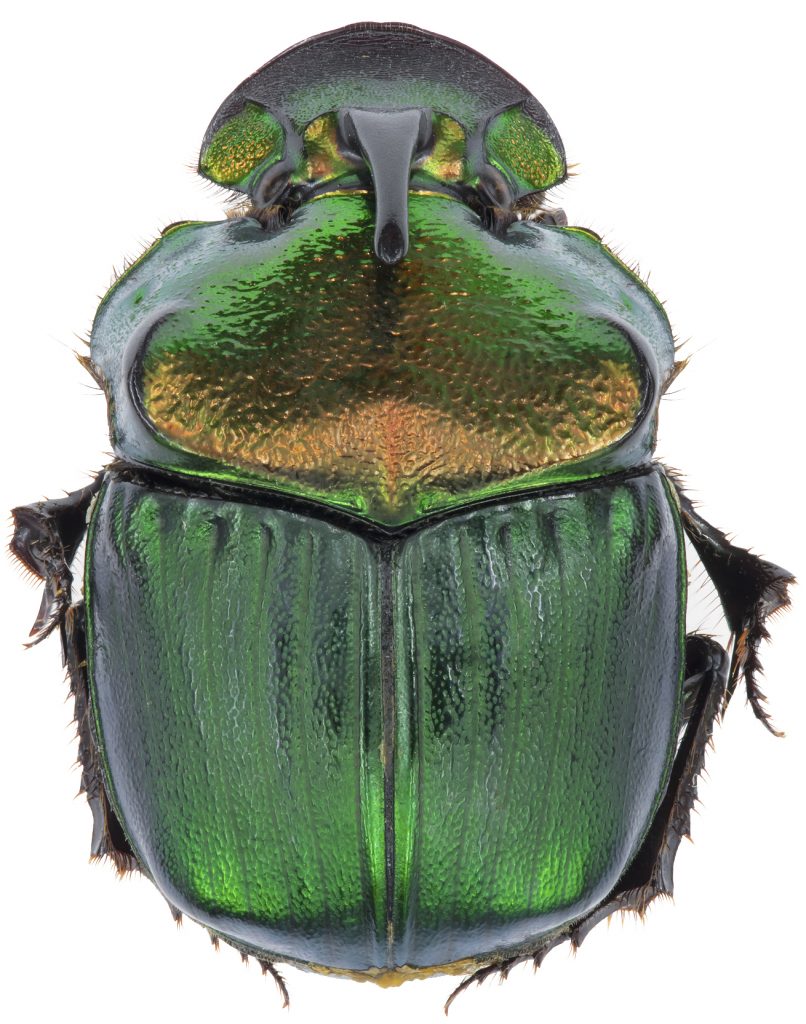 We began a long-term study of the diversity of insects and other arthropods on the Ichauway landscape in the summer of 2020. Using a variety of passive traps (pitfalls, blue vane, bee bowls, Malaise, and UV light funnel traps), we are sampling flying and crawling insects in four different ecological communities. These traps will be regularly sampled in perpetuity to enable us to qualify and quantify trends in the occurrence and abundance of the many, many insect species present onsite. We are also looking at insect occurrence and abundance in agricultural fields grown for quail food, as well as in the surrounding untilled land. For more information click here.